Keep up to date with our latest news
Print 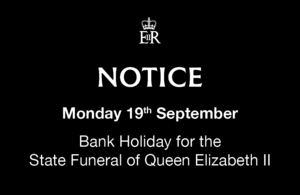 The Government has announced that Monday 19th September, the date of Her Majesty Queen Elizabeth II's State Funeral, will be a national bank holiday, to mark the last day of the period of national mourning.

We have made the decision to close the office on the 19th September. We will reopen Tuesday 20th September as usual, where we will deal with any orders and enquiries that have come in the previous day.

Thank you for your understanding and continued support.

When you subscribe to the blog, we will send you an e-mail when there are new updates on the site so you wouldn't miss them.

Thank you for your service.